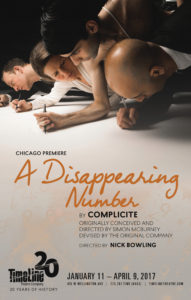 I’m not a math guy. Never really have been and never really aspired to be.

Like many “creative types,” the thought of math, equations or formulas makes my eyes glaze over and blood run cold. In college, I used my theatre curriculum as a protective shield to enroll in only one math class—what was referred to as “kiddie math” by my father (who is a math guy).

But, despite my best efforts to keep them at a distance, numbers are inescapable. They’re all around us, layered into our lives in infinite ways. Perhaps now more than ever, with the technology at our fingertips, we’re linked to—and benefiting from—mathematical equations with every transaction, electronic communication and password login that seem to define our daily routine.

So why do some, like me, hear words like “prime number,” “integer,” “theta function,” or “to the third power” and shudder, while others find beauty therein and can get lost in a complex spreadsheet as if it is a juicy novel? Are we locked into one of two camps at birth? In elementary school? Once we’ve reached adulthood, is there any hope to change teams, to suddenly gain the appreciation, love and wonder that lies within the world of mathematics?

I don’t know the answer to that. But A Disappearing Number, the mind-bending and altogether entrancing play devised by Simon McBurney and his London-based company Complicite, may be the best temptress I’ve encountered to lure me into the beauty of math. When I and my fellow TimeLine Company Members (many of whom share my feelings about math) first read this play, it knocked us out. Unlike anything we’ve produced in TimeLine’s 20 years, this play is a mind-rushing and heart-pounding journey through time, not only igniting one’s brain but touching one’s heart with the glory of new discovery and reminder of life’s frailty.

Spanning from London to India and jumping from the 1910s to the 2010s, this is a love story and a love letter. To time. To travel. To connectivity. To numbers. And to infinite possibilities that can link people from different worlds and connect the dots between past and present.

Through the interweaving stories of A Disappearing Number, we’re reminded of all that connects and grounds us. Numbers don’t lie. They may confuse and perplex, but they don’t lie.

Through the eyes of a modern-day romance, we venture to 1913 and encounter a different kind of romance between two of the foremost minds of mathematical analysis, Cambridge Professor G.H. Hardy and Indian boy wonder Srinivasa Ramanujan. These two were an unlikely duo, yet a revolutionary meeting of the minds. Today we may take for granted how we’re able to forge connections across cultures and continents, but Hardy and Ramanujan’s early 20th Century bond and collaboration was exceptional in every way.

Through the interweaving stories of A Disappearing Number, we’re reminded of all that connects and grounds us. Numbers don’t lie. They may confuse and perplex, but they don’t lie. And, even for a self-proclaimed math neophyte, the most beautiful thing that numbers demonstrate is that possibilities are limitless. They can take you somewhere you’ve never been before, show you infinite potentiality. That’s a wonderment everyone can grasp and cherish.

I’m beyond grateful to this remarkable team of artists who have poured their intellect and passion into TimeLine’s production of A Disappearing Number. I hope you’ll join us for this journey.