Nowhere is this clearer than in the relationship between Annie and Sabrina Daldry, two women who find themselves isolated by a culture that scrutinizes and confines them. Understanding the intimate moment that these two women share at the end of the play, and why they ultimately decide to part for good, is in many ways tied to understanding cultural ideas about how gender and sexuality worked during this time period. Of course, I don’t pretend to provide a definitive answer as to why the play ends as it does for these women. However, I do offer a brief analysis of the world they live in in the hopes that their story sheds light on our here and now.

One of the most important things to remember about late 19th century U.S. society is this: the white male body was universally considered the default human condition. Consequently, female bodies were in many ways understood as abnormal or unfinished male bodies. This notion was embedded in every aspect of society: Medicine, human sexuality, and gender-construction all hinged on this idea. This is called androcentricity (andro is a Greek prefix meaning male), and as you will see in In the Next Room…, it had an especially profound effect on women. 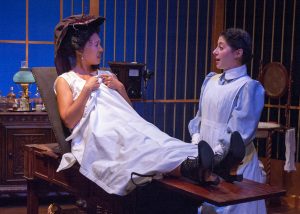 While the idea that female humans are in fact failed males is an old one (ancient Greece!), it is still very much in effect in In the Next Room or the vibrator play. Women in general were thought to be uniquely susceptible to nervous illness simply given the fact that they were female—their very biological makeup was thought to be responsible for an unreliable temperament and mental instability. Coupled with the scientific and cultural assumption that women only experienced sexual pleasure during penetration and male ejaculation, the pervasive authority of these ideas resulted in even the most basic understanding of female sexuality being at best severely misinformed and at worst non-existent.

In fact, many of the symptoms of “hysteria,” itself a biological affliction almost entirely restricted to women, represent the normal functioning of female sexuality. Hysteria was a catchall illness whose symptoms covered contemporary diagnoses that range from anorexia, post-traumatic stress disorder, anemia, depression, and much more. The broad nature of this diagnosis justified a cultural understanding of women’s bodies as flawed and in need of male intervention through treatment, marriage, or paternalism.

In addition to these pseudo-scientific cultural ideas, women were expected to aspire to marriage and motherhood, and many aspirations outside of that were considered dangerous, deviant, and immoral. Acceptable occupations for unwed women and women without children were limited to teaching, nursing and midwifery, or domestic service. Many famous women who did not fit neatly into those boxes, such as Florence Nightingale, Jane Addams, Virginia Woolf and Charlotte Perkins Gilman, were treated for hysteria. 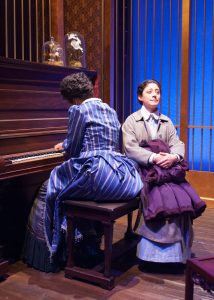 When observing relationships between people, during the time in which In the Next Room… takes place, it’s only natural to layer a contemporary understanding of sexuality onto the records that are left to us. The question of whether Annie and Sabrina were lesbians, bisexual, pansexual or any of the wide and ever-evolving sexual categories used by our society to understand, identify and classify people, is a complicated one. The very possibility that women could experience romantic and sexual attraction to each other was submerged by the same androcentricity that upheld the idea that women were perpetually in need of intervention.

Close relationships between women, especially wealthy women, were not uncommon. How many of those relationships would be considered lesbian, or homosexual relationships, is not always clear. Some records are very plain, as in the lifelong relationship between Minnie Benson and Lucy Tait. Others are not so clear.

Such close relationships between women were often seen as innocent of sexual desire because of how female sexuality was perceived, yet simultaneously were also seen as a sort of practice for marriage. Additionally, it’s important to note that while sexual relations between men was heavily legislated and policed, sexual relations between women were invisible under the law in the U.S. insofar as they were not scandalous, or “notorious,” and kept private.

What does all this mean for Annie and Sabrina Daldry? Depends on who you ask. However, historical records give us an idea of what might have been going through their minds. Things to remember: 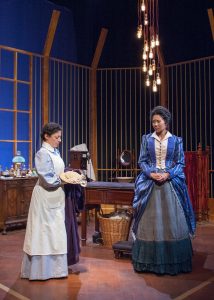 So, in that brief and crystalline moment, what is Sabrina thinking? What is Annie thinking?

What I do know is this: both of these women were well acquainted with the patriarchal social pressure that surrounded them, and with the danger present in rejecting those expectations, even if they might not have been able to articulate it. So as crushing as their parting may be, I cannot fault either of them for it. And therein lives Sarah Ruhl’s genius.